Ensuring the reliability of SIG Node upstream code is a continuous effort that takes a lot of behind-the-scenes effort from many contributors. There are frequent releases of Kubernetes, base operating systems, container runtimes, and test infrastructure that result in a complex matrix that requires attention and steady investment to "keep the lights on." In May 2020, the Kubernetes node special interest group ("SIG Node") organized a new subproject for continuous integration (CI) for node-related code and tests. Since its inauguration, the SIG Node CI subproject has run a weekly meeting, and even the full hour is often not enough to complete triage of all bugs, test-related PRs and issues, and discuss all related ongoing work within the subgroup.

The Node CI subproject is an approachable first stop to help new contributors get started with SIG Node. There is a low barrier to entry for new contributors to address high-impact bugs and test fixes, although there is a long road before contributors can climb the entire contributor ladder: it took over a year to establish two new approvers for the group. The complexity of all the different components that power Kubernetes nodes and its test infrastructure requires a sustained investment over a long period for developers to deeply understand the entire system, both at high and low levels of detail.

We have several regular contributors at our meetings, however; our reviewers and approvers pool is still small. It is our goal to continue to grow contributors to ensure a sustainable distribution of work that does not just fall to a few key approvers.

It's not always obvious how subprojects within SIGs are formed, operate, and work. Each is unique to its sponsoring SIG and tailored to the projects that the group is intended to support. As a group that has welcomed many first-time SIG Node contributors, we'd like to share some of the details and accomplishments over the past two years, helping to demystify our inner workings and celebrate the hard work of all our dedicated contributors!

_ May 2020. _ SIG Node CI group was formed on May 11, 2020, with more than30 volunteerssigned up, to improve SIG Node CI signal and overall observability. Victor Pickard focused on gettingtestgrid jobs passing when Ning Liao suggested forming a group around this effort and came up with the original group charter document. The SIG Node chairs sponsored group creation with Victor as a subproject lead. Sergey Kanzhelev joined Victor shortly after as a co-lead.

At the kick-off meeting, we discussed which tests to concentrate on fixing first and discussed merge-blocking and release-blocking tests, many of which were failing due to infrastructure issues or buggy test code.

_ August 2020. _ All merge-blocking and release-blocking tests were passing, with some flakes. However, only 42% of all SIG Node test jobs were green, as there were many flakes and failing tests.

_ October 2020. _ Amim Knabben becomes a Kubernetes org member for his contributions to the subproject.

_ January 2021. _ With healthy presubmit and critical periodic jobs passing, the subproject discussed its goal for cleaning up the rest of periodic tests and ensuring they passed without flakes.

Elana Hashman joined the subproject, stepping up to help lead it after Victor's departure.

_ February 2021. _ Artyom Lukianov becomes a Kubernetes org member for his contributions to the subproject.

_ August 2021. _ After SIG Node successfully ran a bug scrubto clean up its bug backlog, the scope of the meeting was extended to include bug triage to increase overall reliability, anticipating issues before they affect the CI signal.

Subproject leads Elana Hashman and Sergey Kanzhelev are both recognized as approvers on all node test code, supported by SIG Node and SIG Testing.

_ September 2021. _ After significant deflaking progress with serial tests in the 1.22 release spearheaded by Francesco Romani, the subproject set a goal for getting the serial job fully passing by the 1.23 release date.

Mike Miranda becomes a Kubernetes org member for his contributions to the subproject.

_ November 2021. _ Throughout 2021, SIG Node had no merge or release-blocking test failures. Many flaky tests from past releases are removed from release-blocking dashboards as they had been fully cleaned up.

Danielle Lancashire was recognized as a reviewer for SIG Node's subgroup, test code. 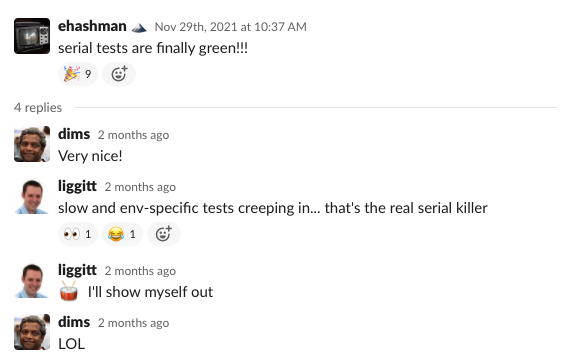 The 1.23 release got a special shout out for the tests quality and CI signal. The SIG Node CI subproject was proud to have helped contribute to such a high-quality release, in part due to our efforts in identifying and fixing flakes in Node and beyond. 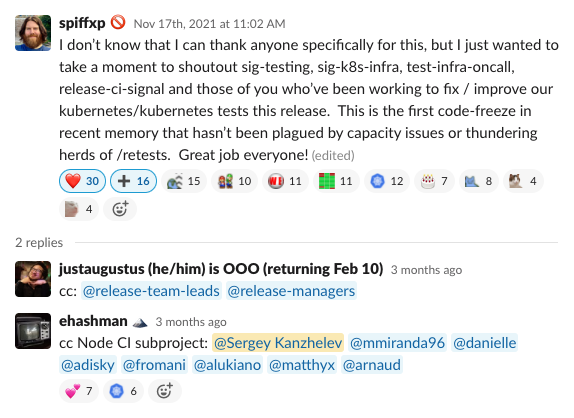 Dockershim code was removed from Kubernetes. This affected nearly half of SIG Node's test jobs and the SIG Node CI subproject reacted quickly and retargeted all the tests. SIG Node was the first SIG to complete test migrations off dockershim, providing examples for other affected SIGs. The vast majority of new jobs passed at the time of introduction without further fixes required. The effort of removing dockershim) from Kubernetes is ongoing. There are still some wrinkles from the dockershim removal as we uncover more dependencies on dockershim, but we plan to stabilize all test jobs by the 1.24 release.

Our regular meeting attendees and subproject participants for the past few months:

Triaged issues and PRs on CI board (including triaging away from the subgroup scope):

Just "keeping the lights on" is a bold task and we are committed to improving this experience. We are working to simplify the triage and review processes for SIG Node.

Specifically, we are working on better test organization, naming, and tracking:

We are also constantly making progress on improved tests debuggability and de-flaking.

If any of this interests you, we'd love for you to join us! There's plenty to learn in debugging test failures, and it will help you gain familiarity with the code that SIG Node maintains.

You can always find information about the group on theSIG Node page. We give group updates at our maintainer track sessions, such asKubeCon + CloudNativeCon Europe 2021 andKubeCon + CloudNative North America 2021. Join us in our mission to keep the kubelet and other SIG Node components reliable and ensure smooth and uneventful releases!

How to Use Grep with -A and -B Options for Efficient Text File Searching in Linux Systems.

How to Reset the Root Password of Linux (CentOS 8)