Deleting objects in Kubernetes can be challenging. You may think you’ve deleted something, only to find it still persists. While issuing a kubectl delete command and hoping for the best might work for day-to-day operations, understanding how Kubernetes delete commands operate will help you understand why some objects linger after deletion.

For simplicity, all examples will use ConfigMaps and basic shell commands to demonstrate the process. We’ll explore how the commands work and discuss repercussions and results from using them in practice.

Kubernetes has several different commands you can use that allow you to create, read, update, and delete objects. For the purpose of this blog post, we’ll focus on four kubectl commands: create, get, patch, and delete.

Here are examples of the basic kubectl delete command:

Shell commands preceded by $ are followed by their output. You can see that we begin with a kubectl create configmap mymap, which will create the empty configmap mymap. Next, we need to get the configmap to prove it exists. We can then delete that configmap. Attempting to get it again produces an HTTP 404 error, which means the configmap is not found.

The state diagram for the basic delete command is very simple:

Although this operation is straightforward, other factors may interfere with the deletion, including finalizers and owner references.

When it comes to understanding resource deletion in Kubernetes, knowledge of how finalizers work is helpful and can help you understand why some objects don’t get deleted.

Finalizers are keys on resources that signal pre-delete operations. They control the garbage collection on resources, and are designed to alert controllers what cleanup operations to perform prior to removing a resource. However, they don’t necessarily name code that should be executed; finalizers on resources are basically just lists of keys much like annotations. Like annotations, they can be manipulated.

The finalizers above are used on volumes to prevent accidental deletion. Similarly, some finalizers can be used to prevent deletion of any resource but are not managed by any controller.

Below with a custom configmap, which has no properties but contains a finalizer:

The configmap resource controller doesn't understand what to do with the kubernetes finalizer key. I term these “dead” finalizers for configmaps as it is normally used on namespaces. Here’s what happen upon attempting to delete the configmap:

Here's a demonstration of using the patch command to remove finalizers. If we want to delete an object, we can simply patch it on the command line to remove the finalizers. In this way, the deletion that was running in the background will complete and the object will be deleted. When we attempt to get that configmap, it will be gone.

Here's a state diagram for finalization: 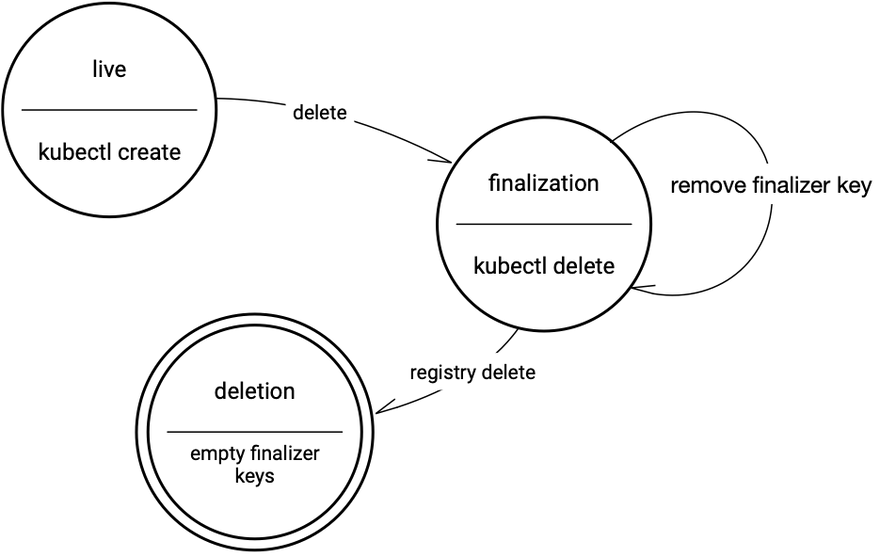 So, if you attempt to delete an object that has a finalizer on it, it will remain in finalization until the controller has removed the finalizer keys or the finalizers are removed using Kubectl. Once that finalizer list is empty, the object can actually be reclaimed by Kubernetes and put into a queue to be deleted from the registry.

Owner references describe how groups of objects are related. They are properties on resources that specify the relationship to one another, so entire trees of resources can be deleted.

Here are some examples of owner references and how they work. In the first example, we create a parent object first, then the child. The result is a very simple configmap that contains an owner reference to its parent:

Deleting the child object when an owner reference is involved does not delete the parent:

In this example, we re-created the parent-child configmaps from above. Now, when deleting from the parent (instead of the child) with an owner reference from the child to the parent, when we get the configmaps, none are in the namespace:

To sum things up, when there's an override owner reference from a child to a parent, deleting the parent deletes the children automatically. This is called cascade. The default for cascade is true, however, you can use the --cascade=orphan option for kubectl delete to delete an object and orphan its children. Update: starting with kubectl v1.20, the default for cascade is background.

In the following example, there is a parent and a child. Notice the owner references are still included. If I delete the parent using --cascade=orphan, the parent is deleted but the child still exists:

The --cascade option links to the propagation policy in the API, which allows you to change the order in which objects are deleted within a tree. In the following example uses API access to craft a custom delete API call with the background propagation policy:

Note that the propagation policy cannot be specified on the command line using kubectl. You have to specify it using a custom API call. Simply create a proxy, so you have access to the API server from the client, and execute a curl command with just a URL to execute that delete command.

There are three different options for the propagation policy:

Keep in mind that when you delete an object and owner references have been specified, finalizers will be honored in the process. This can result in trees of objects persisting, and you end up with a partial deletion. At that point, you have to look at any existing owner references on your objects, as well as any finalizers, to understand what’s happening.

Forcing a Deletion of a Namespace

This should be done with caution as it may delete the namespace only and leave orphan objects within the, now non-exiting, namespace - a confusing state for Kubernetes. If this happens, the namespace can be re-created manually and sometimes the orphaned objects will re-appear under the just-created namespace which will allow manual cleanup and recovery.

As these examples demonstrate, finalizers can get in the way of deleting resources in Kubernetes, especially when there are parent-child relationships between objects. Often, there is a reason for adding a finalizer into the code, so you should always investigate before manually deleting it. Owner references allow you to specify and remove trees of resources, although finalizers will be honored in the process. Finally, the propagation policy can be used to specify the order of deletion via a custom API call, giving you control over how objects are deleted. Now that you know a little more about how deletions work in Kubernetes, we recommend you try it out on your own, using a test cluster.

How to deploy WordPress and MySQL on Kubernetes