In this post, I am going to explain the process of creating a k8s cluster using kind from scratch.

Kind is a tool that helps you run a local Kubernetes cluster using Docker containers. It is easy to install and provides all the features you need to get started with Kubernetes. You can use it to manage your development environment, test out new features, or simply play around with Kubernetes. Kind is also open-source, so you can contribute to its development if you want. Overall, Kind is a great tool for anyone who wants to learn about or use Kubernetes.

There are many reasons why you might want to use Kind. First, it is easy to install and get started with. There is no need to set up a separate VM or cluster; you can just run it on your local machine. Second, Kind provides all the features you need to get started with Kubernetes. It has support for multiple Kubernetes versions, so you can test out new features or try different configurations. Third, Kind is open-source, so you can contribute to its development if you want. Finally, using Kind is a great way to learn about Kubernetes and how it works.

How to install kind?

Installing Kind is simple. Just follow the instructions on the official website: https://kind.sigs.k8s.io/. You will see various approaches to installation kind

Prerequisites: Docker should be available in your system to create a cluster using kind.

Since I am using Macbook Pro, so I will use homebrew to install kind.

Verify the installation by checking the version.

It will return kind version.
Once you have installed Kind, you can create a cluster using the following command:

It will create one master myFirstCluster k8s cluster. If you do not specify --name by default kind cluster will be created. keep in mind cluster name is case sensitive.

This is the single node cluster we have created just now.

Here, we can see cluster info about cluster which we have created.

All the pods running in myfirstk8cluster

First, we need to create a node configuration yaml file and add the resources information in it. To do the same run below command.

it will create a yaml file called multi-node-config.
After, creating the file add below nodes details to create three master and five worker nodes.

kind represents the type of Kubernetes objects to be created while using the yaml file.
apiVersion represents version of the Kubernetes API you're using to create this object.
name represents name of the cluster
nodes represents The kind: Cluster object has a nodes field containing a list of node objects. If unset this defaults to:

control-plane is a master node. The API-server and other control plane components will be on the control-plane node.
worker The worker nodes are the part of the Kubernetes clusters which actually execute the containers and applications on them.

we are ready to create 8 nodes cluster with three master and five worker nodes. Now, Run below command in the terminal.

we can see multi-node cluster is created.let's explore the cluster and nodes using below command. 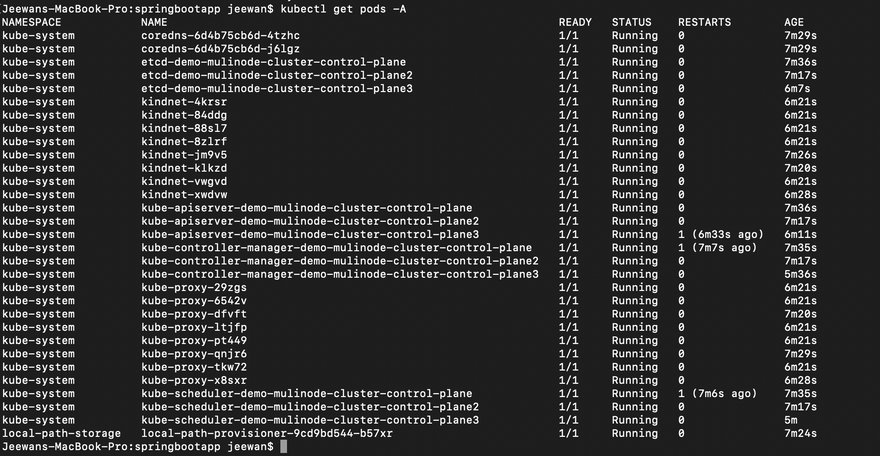 As of now we have successfully created multi-node cluster using kind.In the next section we will discuss how to create docker image simple Java springboot application and deploy in kubernetes cluster.

Openshift UPI: Introduction Kubelet, the only daemon I love

How I passed my CKAD exam

Once suspended, jeewangautam will not be able to comment or publish posts until their suspension is removed.

Once unsuspended, jeewangautam will be able to comment and publish posts again.

Once unpublished, all posts by jeewangautam will become hidden and only accessible to themselves.

If jeewangautam is not suspended, they can still re-publish their posts from their dashboard.

Once unpublished, this post will become invisible to the public and only accessible to Jeewan Gautam.

Thanks for keeping Goglides Dev 🌱 safe. Here is what you can do to flag jeewangautam:

Unflagging jeewangautam will restore default visibility to their posts.