To jump in the depths about this popular orchestration system for the management of multi-container applications at a scale, we have come up with a brief description of its first part-Pods

So, What exactly are the Pods?

In simple words, the pods are the group of one or more containers that are deployed to a single node, which represents the process running on the cluster. Unlike other systems introduced in the past, what users may find different is how the system doesn’t directly run the containers. Instead of that, the Kubernetes combines one or more containers into a high-level structure, which are known as pods.All of the containers in the same pod share the same IP address, hostname, IPC(International Patent Classification), including other resources. The container can communicate with each other as long as they are in the same pod, they act as they are the integrated part of a single machine and at the same time maintaining some level of isolation from other pods. There is also the possibility of the individual applications within a Pod’s context may have some further sub-isolations part applied. In the matter of containers in different pods, the containers have a different IP address that varies from each pod and cannot communicate with each other without a special configuration.

Further, the Kubernetes uses the whole pod as the smallest deployable unit instead of a single container; there are also good reasons for it. As the pods represent the layer of abstractions, and it helps the system to wrap the container that should be managed as a single entity. The containers in the pod have access to the shared volumes (a directory that is accessible to all the containers that are running in a pod) that are used to mount each container’s filesystems. Generally, the pods are used as Kubernetes’s replicating units. In case the application of the user becomes very popular, and the load cannot be handled by a single pod, the users can configure the Kubernetes to deploy the new replicas of their pod to the cluster as per their need. Even when the load isn’t that heavy, it is best to have multiple copies of the pod running in the production system to ensure that the load is balanced and so that the system is failure resistance. So, what are the other uses of pods?

An example of the pod:

Customarily, the pods in the Kubernetes cluster can be used in two major ways:

1. Pods for a single container

2. Pods for multiple containers that need to work as a single cohesive unit

In case the application runs with the multiple containers, the multi-container pods tightly couples containers that need to share the resources. The co-located containers in this type of pods act as the single cohesive unit sharing the volume and working as the need for the application. The significant purpose of a multi-container pod is to co-locate, co-manage, and support the helper process for the primary application. However, there are some downside like, if you have 3 containers inside same pod, let say 1,2, and 3. If container 1 needs scaling, we need to scale all 3. This is simply wasting memory and resource usages.

The Kubernetes pod works as a group of containers that are deployed together to interact with the system, on the other hand, the controller is the manager in the system that maintains the pods and makes sure that they set on a specified state. The controllers also play a very crucial role in the system as they are in charge of replacing the pods, in case they fail to perform. Similarly, the controllers are also responsible for running the required number of the pods’ replicas in the whole cluster in the situations if they get deleted or terminated.

The Pod templates field is the component of the controller. The Pod templates contain a ‘pod specification’ field that determines how a pod should run, including how the containers should work together within a pod and the volume the pod should mount. The controller uses the Pod templates to create a pod and manage it’s stated as desired by the application. Each controller separated for a workload resource uses the templates as the desired state of workload object necessary to run the application. Also, the characteristics of a pod can be changed using the new template, all the pods running in the system are not bound to accept the new changes and the changes templates doesn’t affect them, however, the new pods will reflect the characteristics mention in the new template. The pods won’t receive the templates updates directly, instead of that, the controller creates a new pod to match requirements set by the new templates.

The pods are created by using the controller,such as Deployment, which creates and destroys the replicas of the pods as per necessity. As the pods are transitory, they are no created directly; after creating the pods, they are scheduled to run specific to the needs in the user’s cluster. Further, the controllers also create and manage the pods to meet the specification as the pods are not able to repair or replace themselves when needed. These controllers also are important in updating the pods and changing the version of the application running in the container.

The pods are labeled taking their name, role, nature, version, etc. into consideration. Then the pods are selected by the replication controllers depending on the similarities for a certain role, as per the need of the applications and also for more complex action depending on the demand of the user. The labeling system is exceptionally flexible by design, and the users can experiment with the practices that work best for them.

Basically, there are thee way of creating a pod in the Kubernetes cluster:

The pods can be created with the kubectl command that is directly applied to the Kubernetes cluster. For example, if the user wants to deploy the Nginx web server into the cluster, the user can directly create a pod.

2. Declarative Method In this process, the pods are created by writing the manifests and using the kubectl apply. This manifest contains the metadata and the specification details w.r.t that help the user to create the object they want. This method is also quite helpful for updating the objects running in the Kubernetes cluster.

3. Using an Rest API interface The API server performs the authentication, authorization, and admission control of the clients. In the cluster, the API is exported on port 443, which can be accessed through the TLS connection. The self-signed certificate which is generated during the cluster configuration is available at ‘$USER/.kube/config’ on the client machine. A simple nginx pod: 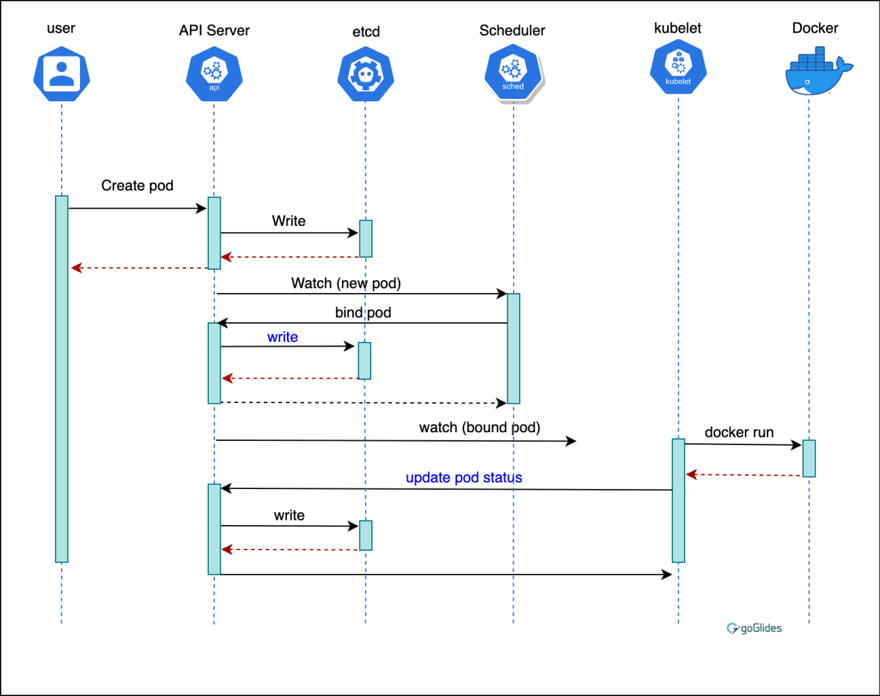 The status of pods can determine in which phase of its lifecycle. The pods are not designed to run forever, and the terminated pods cannot be brought back. Pods don’t cease to exist unless the user himself or the controller deletes the pods. The pods in the system have a PodStaus API object which determines the current life phase of the pod. The pods themselves publish their phase to the PodStatus, and the user or controller can take the necessary actions accordingly. The lifecycle of the pods that are created using cronjobs or jobs can be classified into five phases:

This is the state of the pod when it has been created and already accepted by the cluster; however, all the containers inside the pod are not fully functional at the moment. This phase determines the missing container for the pod to be fully functional.

2. Running The running state of the pod represents it’s successful bound to a node after the completion of creating all the necessary containers in it. In this phase, at least one container is running; it either in the process of starting or restarting.

The succeeded phase of the pod’s lifecycle determines the deletion of all the containers in a specific pod. Whether it be they are out of the use or need new replacements, the pod is emptied deleting all the containers. The terminated pods do not start again after being removed from the system.

The unknown phase is published by the pods in PodStatus when the state of that particular pod cannot be determined.

The ‘PodConditions’ are represented in the pod manifest as ‘conditions’; the field has a ‘type’ and ‘status.’ The ‘field’ contains the ‘PodScheduled,’ ’Ready,’ ‘Initialized,’ and ‘Unschedulable’ condition of the whereas, the ‘status’ field determines ‘type’ field, including ‘True,’ ‘False’ or ‘Unknown’ statuses. As the pods represent the processing running on the cluster, after their processes are complete, they can be gracefully terminated. Kubernetes provides the 30 seconds grace period for the deletion of the pods that are no longer required. The grace period can be configured according to the wish of the user by setting the ‘–grace-period’ while interacting with the cluster to request the termination.

Here are the steps for the termination of a pod:

Step 1: The users send commands or API calls to terminate the pod.

Step 2: The Kubernetes updates the Pod status with the time period beyond which the pod is considered ‘dead’(the termination request period plus the grace period set by the user).

Step 3: The Kubernetes system marks the pod as ‘Terminating and stops sending traffics to the pod.

Step 4: The termination request is sent to the main process ‘PID 1’ in each container of the pod, and the ‘grace period’ countdown commences. Then the containers start the graceful shutdown of the running application and exit it.

Step 5: In case, if a container doesn’t terminate within the marked grace period, a ‘SIGKILL’ is sent by the system to terminate the container violently.

Step 6: The Kubernetes finishes deleting the pod on the API server on the Kubernetes Master and is no longer visible from the client.

ReplicaSet, how it manages Pods in k8s cluster.

Balkrishna Pandey
Bal is a Solution Architect at Redhat. Born and raised in Nepal, he loves outdoor activities and enjoys being on the digital transformation journey with his clients.
journalctl to debug Kubernetes
#kubernetes #openshift
how to get/delete pods based on nodename
#kubernetes #openshift
Stop using kubeconfig with admin access | Service account no longer auto-generate secret
#kubernetes