It's with immense joy that we announce the release of Kubernetes v1.26! 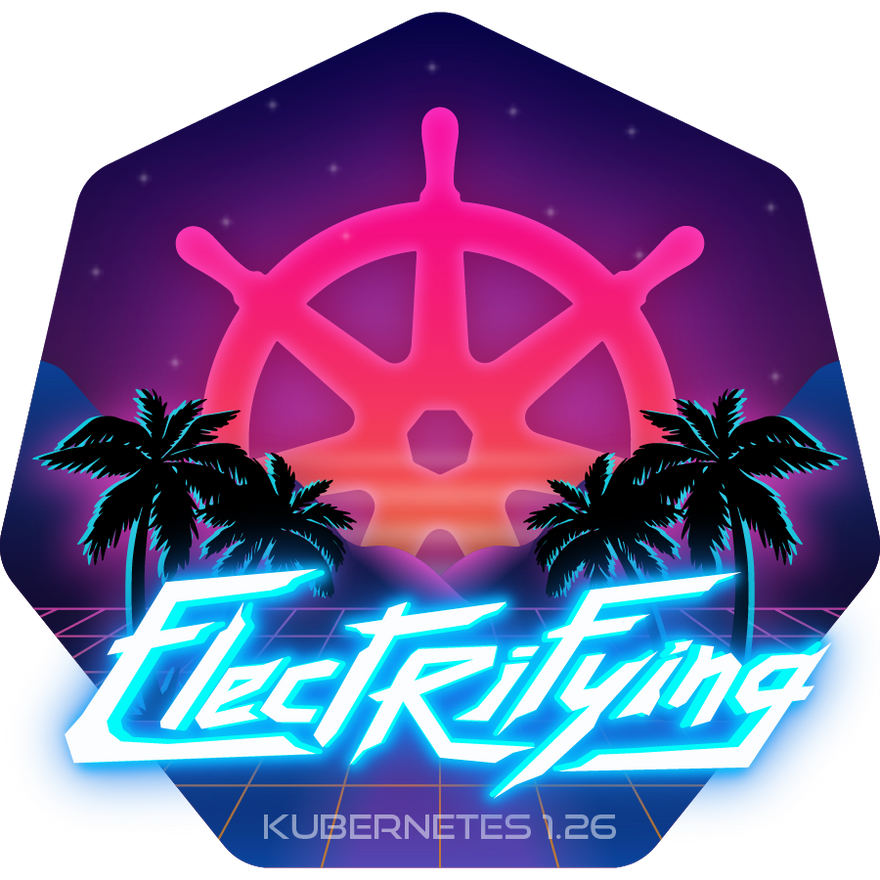 The theme for Kubernetes v1.26 is Electrifying.

Each Kubernetes release is the result of the coordinated effort of dedicated volunteers, and only made possible due to the use of a diverse and complex set of computing resources, spread out through multiple datacenters and regions worldwide. The end result of a release - the binaries, the image containers, the documentation - are then deployed on a growing number of personal, on-premises, and cloud computing resources.

In this release we want to recognise the importance of all these building blocks on which Kubernetes is developed and used, while at the same time raising awareness on the importance of taking the energy consumption footprint into account: environmental sustainability is an inescapable concern of creators and users of any software solution, and the environmental footprint of sofware, like Kubernetes, an area which we believe will play a significant role in future releases.

As a community, we always work to make each new release process better than before (in this release, we have started to use Projects for tracking enhancements, for example). If v1.24 "Stargazer" had us looking upwards, to what is possible when our community comes together, and v1.25 "Combiner" what the combined efforts of our community are capable of, this v1.26 "Electrifying" is also dedicated to all of those whose individual motion, integrated into the release flow, made all of this possible.

Kubernetes v1.26 is composed of many changes, brought to you by a worldwide team of volunteers. For this release, we have identified several major themes.

In the previous release, Kubernetes changed the container registry, allowing the spread of the load across multiple Cloud Providers and Regions, a change that reduced the reliance on a single entity and provided a faster download experience for a large number of users.

This release of Kubernetes is the first that is exclusively published in the new registry.k8s.iocontainer image registry. In the (now legacy) k8s.gcr.io image registry, no container images tags for v1.26 will be published, and only tags from releases before v1.26 will continue to be updated. Refer to registry.k8s.io: faster, cheaper and Generally Available for more information on the motivation, advantages, and implications of this significant change.

With the adoption of the Container Runtime Interface (CRI) and the removal of dockershim in v1.24, the CRI is the only supported and documented way through which Kubernetes interacts with different container runtimes. Each kubelet negotiates which version of CRI to use with the container runtime on that node.

In the previous release, the Kubernetes project recommended using CRI version v1, but kubelet could still negotiate the use of CRI v1alpha2, which was deprecated.

Following the GA of the core Container Storage Interface (CSI) Migrationfeature in the previous release, CSI migration is an on-going effort that we've been working on for a few releases now, and this release continues to add (and remove) features aligned with the migration's goals, as well as other improvements to Kubernetes storage.

CSI migration for Azure File and vSphere graduated to stable

Both the vSphere andAzure in-tree driver migration to CSI have graduated to Stable. You can find more information about them in the vSphere CSI driver and Azure File CSI driver repositories.

This feature allows Kubernetes to supply the pod's fsGroup to the CSI driver when a volume is mounted so that the driver can utilize mount options to control volume permissions. Previously, the kubelet would always apply thefsGroupownership and permission change to files in the volume according to the policy specified in the Pod's .spec.securityContext.fsGroupChangePolicy field. Starting with this release, CSI drivers have the option to apply the fsGroup settings during attach or mount time of the volumes.

Already deprecated in the v1.25 release, the in-tree GlusterFS driver wasremoved in this release.

This release removed the deprecated in-tree storage integration for OpenStack (the cinder volume type). You should migrate to external cloud provider and CSI driver fromhttps://github.com/kubernetes/cloud-provider-openstack instead. For more information, visit Cinder in-tree to CSI driver migration.

Introduced in Kubernetes v1.24, this feature constitutes a significant milestone in improving the security of the Kubernetes release process. All release artifacts are signed keyless using cosign, and both binary artifacts and imagescan be verified.

This release has several noteworthy improvements on metrics.

Also improving on the ability to consume Kubernetes metrics, component health Service Level Indicators (SLIs) have graduated to Alpha: by enabling the ComponentSLIsfeature flag there will be an additional metrics endpoint which allows the calculation of Service Level Objectives (SLOs) from raw healthcheck data converted into metric format.

Feature metrics are now available for each Kubernetes component, making it possible to track whether each active feature gate is enabledby checking the component's metric endpoint for kubernetes_feature_enabled.

Dynamic Resource Allocationis a new featurethat puts resource scheduling in the hands of third-party developers: it offers an alternative to the limited "countable" interface for requesting access to resources (e.g. nvidia.com/gpu: 2), providing an API more akin to that of persistent volumes. Under the hood, it uses the Container Device Interface (CDI) to do its device injection. This feature is blocked by the DynamicResourceAllocation feature gate.

This feature introduces a v1alpha1 API for validating admission policies, enabling extensible admission control via Common Expression Language expressions. Currently, custom policies are enforced via admission webhooks, which, while flexible, have a few drawbacks when compared to in-process policy enforcement. To use, enable the ValidatingAdmissionPolicy feature gate and the admissionregistration.k8s.io/v1alpha1API via --runtime-config.

This feature introduces a .spec.schedulingGatesfield to Pod's API, to indicate whether the Pod is allowed to be scheduled or not. External users/controllers can use this field to hold a Pod from scheduling based on their policies and needs.

This release includes a total of eleven enhancements promoted to Stable:

12 features were deprecated or removed from Kubernetes with this release.

The complete details of the Kubernetes v1.26 release are available in our release notes.

Kubernetes v1.26 is available for download on the Kubernetes site. To get started with Kubernetes, check out these interactive tutorials or run local Kubernetes clusters using containers as "nodes", with kind. You can also easily install v1.26 using kubeadm.

Kubernetes is only possible with the support, commitment, and hard work of its community. Each release team is made up of dedicated community volunteers who work together to build the many pieces that make up the Kubernetes releases you rely on. This requires the specialized skills of people from all corners of our community, from the code itself to its documentation and project management.

We would like to thank the entire release teamfor the hours spent hard at work to ensure we deliver a solid Kubernetes v1.26 release for our community.

A very special thanks is in order for our Release Lead, Leonard Pahlke, for successfully steering the entire release team throughout the entire release cycle, by making sure that we could all contribute in the best way possible to this release through his constant support and attention to the many and diverse details that make up the path to a successful release.

In the v1.26 release cycle, which ran for 14 weeks(September 5 to December 9), we saw contributions from 976 companies and 6877 individuals.

Join members of the Kubernetes v1.26 release team on Tuesday January 17, 2023 10am - 11am EST (3pm - 4pm UTC) to learn about the major features of this release, as well as deprecations and removals to help plan for upgrades. For more information and registration, visit the event page.

The simplest way to get involved with Kubernetes is by joining one of the many Special Interest Groups (SIGs) that align with your interests.

Have something you’d like to broadcast to the Kubernetes community? Share your voice at our weeklycommunity meeting, and through the channels below:

How to handle htpasswd authentication, authorization and project access in openshift?

DALL·E 2: How to create Images from Text?