What is Keepalived, and how does it work?

Before we start how we are using Keepalived in our Hyperconverged scenario, let's first understand what is Keepalived and how does it work?

Keepalived is a free, open-source, high availability software based on VRRP protocol to build two or more nodes in failover mode. It is mainly used to implement load balancer and router failover. Keepalived uses LVS (Linux Virtual Server) kernel module and ipvsadm user-space utility for its operation. It has been released under the GNU GPL license.

High availability means having an infrastructure or application up and running with no downtime. Downtime can be caused by many things such as power failure, network failure, hardware failure, etc. To achieve high availability, we need to have some redundancy in place so that if one component of the cluster fails, another member can take over, and there is no downtime.

VRRP is a protocol that elects a controller node from a group of nodes (called a VRRP cluster), and the traffic is routed through the controller node. If the controller node goes down, another node in the cluster is elected as master, and traffic is routed. The protocol establishes virtual routers, which are abstract representations of numerous routers working as a group, such as Primary/Active and Secondary/Standby routers. Instead of an actual router, the virtual router is allocated to operate as a default gateway for participating hosts. If the router that is routing packets on behalf of the virtual router fails, it is promptly replaced by another physical router. This failover happens automatically without any manual intervention.

VRRP has the concept of Virtual IP, also called VIP. This IP address acts as a floating IP, meaning if the node is down where the VIP is present, VRRP protocol makes sure the VIP address is allocated to a healthy node. So, based on the health check of Virtual IP, VRRP determines the node health and elects an IP owner.

At a given time,

In a Hyperconverged OCP cluster, we use Keepalived to provide high availability for,

In a Kubernetes cluster, the API server is the central point for all operations. All other components, such as kubelet, Kube-proxy, etc., communicate with the API server to perform their functions. So, it is essential to have high availability for the API server.

In a Hyperconverged OCP cluster, we use Keepalived to provide high availability for the API server by creating a virtual IP (VIP) address. This VIP address is assigned to one of the nodes in the cluster, and if that node goes down, another node takes over the VIP and becomes the new API server. This failover is transparent to the users and happens automatically without any manual intervention.

Here is an example Keepalived static manifest and configuration file which we are using for API Server and Openshift Router, 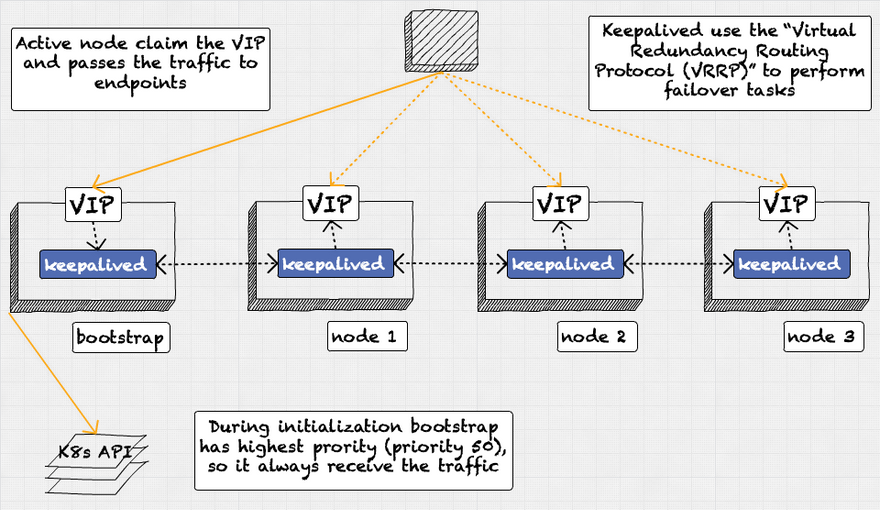 During initialization, we have a four-node cluster. The first node is the bootstrap node. The second, third, and fourth nodes are the controller nodes, which run the control plane pods. All four nodes have Keepalived installed and are configured with the same virtual IP address (VIP).

The bootstrap node is assigned the VIP and acts as the "controller" node when the cluster is first created. The other three nodes are in a "backup" state.

Once the bootstrap process is complete, one of the controller nodes will automatically take over the VIP and become the new "controller" node. After that, we can safely delete the bootstrap node. 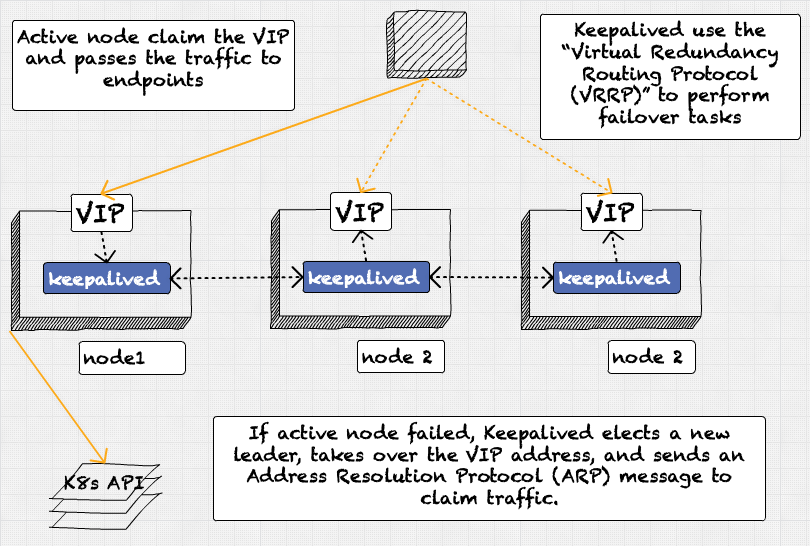 After the initialization is complete, we have a three-node cluster. All three nodes have Keepalived installed and are configured with the same virtual IP address (VIP).

Based on the configuration Keepalived uses the VRRP protocol to evaluate node health; the verification is done based on configured time intervals. Based on this verification, it elects a VIP owner and assigned IP to that node and marks the node as an active router. The traffic is always sent to the active endpoint if something happens to active nodes. Keepalived elects a new leader, takes over the VIP address, and sends an Address Resolution Protocol (ARP) message.

You have to configure separate checks for each service, so in our POC, we will configure the health check for k8s API and Ingress controller.

I think this is a good stopping point for Keepalived; let's move on to the next topic.